Don’t you just love this time of year, after more than eight months of resisting the urge to buy imported strawberries at exorbitant prices, the New Zealand Strawberry season is here at last. I realise that I’m a bit of a masochist as I also avoid the first few weeks of the season as quite frankly they lack in flavour and the last thing I want after waiting so long is to be disappointed.

What is it with a strawberry that makes us all feel happy? Maybe it’s just the promise of summer reflected in the perfect redness or that exquisite aroma as you bite into a freshly picked one still warm from the sun.

Preparing strawberries is a delicate task, as they really don’t like being washed in water. If you must then wash very briefly before hulling them as once the little plug of leaves is out, water can get in and spoil the fruit. Alternatively try washing them in orange juice; you’ll be astonished at the enhancement of the flavour.

The recipe today is an all time standby, put simply 10 minutes to make and 10 minutes to bake, couldn’t be easier. You’ll notice the addition of basil leaves, trust me its not a typo. We often forget our herbs with sweets and its a shame as they can add so much, strawberries need a bit of natural acid to bring out their sweetness so give it a try, you’ll love the result.

Preheat the oven to 220˚C.  Line a swiss roll tray with baking parchment.  Whisk egg whites until very stiff.  Gradually add sugar a little at a time.  Spread on the lined tray and sprinkle with flaked almonds.  Bake for about 10 minutes.

Sprinkle the surface with icing sugar and invert onto another sheet of parchment and cool.  Remove cooked baking parchment in strips. Spread with whipped cream, strawberries and basil leaves. Using the new parchment, roll into the swiss roll shape and serve.

A sweet wine is the obvious choice with this, but for me the strawberries need the acidic sharpness of a good cold Sauvignon Blanc li the one from Bird wines.

Yippee, Spring is here. Which means that the first of the fresh asparagus is starting to hit the shops. Don’t wait, eat as much as you can as the season is short.

Originating in the Eastern Mediterranean, with a distinctive earthy, leafy flavour, asparagus grows wild in some parts of Europe. Greeks and Romans used it as a medicine; it apparently cured bee stings, eases toothache and restores eyesight. Asparagus also has a reputation for being a ‘real stinker’ and a source of endless debate at dinner parties! In some countries people prefer to eat white asparagus which has been grown out of the sun, but Kiwis like it green and there is little, if any, white grown here although purple asparagus is becoming increasingly available.

The North Island’s temperate climate is ideal for the production of sweet tender asparagus spears, the alluvial strip between the Tararua Ranges and the Tasman Sea north of Wellington providing perfect growing conditions. There are over two hundred commercial growers in New Zealand, producing 5,000 tonnes of asparagus every year. Harvested August through to January, peaking in September, about one fifth supplies the local export and the rest is exported fresh (mainly to Japan) or processed into canned, bottled or frozen product.

Fresh asparagus should not be rubbery and should ‘squeak’ when the spears are rubbed together. Choose straight firm green stems with trimmed ends. Asparagus has a high water content and should be stored in a refrigerator, preferably with the ends wrapped in wet paper towels or in plastic bags to prevent dehydration.

Asparagus is an excellent source of antioxidants, especially phenols, carotenoids and vitamin C. One of the best natural sources of folate, asparagus is also a source of fibre and small amounts of many other vitamins and minerals.             If the asparagus is thin and fresh it can be used raw in a salad, otherwise blanching it will produce the best results. Purple asparagus is often eaten raw as it is sweeter and more tender than green. Lemon juice will help retain the purple colour and it should be cooked quickly. For maximum flavour, asparagus should not be overcooked and should be tender but still slightly crisp. It can be steamed, stir-fried, microwaved or boiled. Asparagus is also great on the barbeque or served with a simple sauce or dressing. It can also be used in tarts, soups, salads and other dishes.

This is what the French do best; celebrate one perfect ingredient eaten at its prime and in season. Take a delicate flavour like asparagus and enhance it with the richness of the Hollandaise.

Serves 4 as an entrée or 6 as a vegetable

A large pinch of salt

This is time for happy wines, and the happiest of them all is the Pinot Gris. The Birdman at Bird Wines has sneakily managed to make one that is a beautiful peachy colour while still being dry, an incredibly difficult combination to achieve.

I keep being asked for my seasoning recipe, and I keep forgetting to post it here. Sorry about that.

make up 80 % of the final quantity with salt and pepper. the remaining 20% to be some or all of the remaining spices. I tend to use more cumin and chilli in the winter as they are warming spices and more celery seed in summer as it is cooling. Make sue you have the turmeric and ginger for the health benefit. Use a pestle and mortar to roughly break down the seeds.

Mix all together in a heat proof bowl. Heat a large pan on a medium to high heat, when hot add a tablespoon of veg oil (rice bran would be good) and tip all the seasoning in. Being careful not to burn, panfry the seasoning to release and amalgamate the flavours,stiring all the time. Should take about 5 minutes depending on quantity (use your nose to sense the flavour release). Once good and hot tip back into the heatproof bowl and allow to cool before putting in a sealed contained in the pantry.

I’m just back from foodie heaven, that being Melbourne. I had three days of cooking shows to do at a food extravaganza put on by ESSE stoves with Paul Mecurio. The shows were great fun but the real joy is being able to immerse myself in Melbourne’s food culture. We headed straight from the airport to the foodie temple that is Victoria Street Market. Wow what a place, it seemed like acres of beautiful fresh produce and halls of the finest fish, meat and deli products all just on the edge of the central city. As a chef I’m so jealous of my colleagues in Melbourne, what a pleasure it would be to be able to choose a menu from that astounding array every morning.

Speaking of restaurants, I must just mention the best Tapas that you’ll ever eat outside of Spain is in a restaurant called Movida. They have four restaurant spread around the city, but search out the original one half way up a graffiti strewn alleyway next-door to the theatre on Flinders, it is worth the effort. 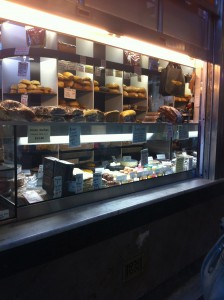 This week I wanted to share with you an old classic that uses a wonderful, if rarely used, cut of meat. Beef cheeks are one of the most astounding flavours and so cheap to buy. Yes I do mean cheeks, the ones near the mouth not the ones at the other end!

With meat cookery you need to look at the amount of work a muscle does to understand its flavour and cooking method. Put simply, the more work a muscle does the better the flavour but the tougher the texture, that’s why the relatively unworked fillet is a fantastic texture even when cooked very quickly but frankly a bit boring in the taste department, which is why we tend to marry it to highly flavoured sauces (like peppercorns).

With beef cheeks, the muscle work rate is phenomenal, which explains the truly extraordinary flavour. If you’ve ever spent some time watching a cow you’ll know that it’s the one muscle that is constantly in motion. The only thing left is to deal with the texture, probably the perfect role of the slow cooker.

salt and pepper to taste

1. In a very hot heavy pan (cast iron would be the best option), sear the cheeks on both sides for approximately 1-2 minutes per side. Remove from pan and set in a slow cooker.

2. Pour the wine over top, sprinkle the cheeks liberally with Chinese five spice, toss in the butter (or duck fat), season to taste with salt and sprinkle the garlic over top.

3. Set the slow cooker to “low” and allow to cook uninterrupted for 8 hours.

4. When finished, remove from slow cooker gently (as they will be delicate and fall apart easily at this stage, and serve with accompanying vegetables or mashed potatoes.

This is such a gloriously rich, full flavoured dish that you can bring out the big, hearty red wine. For me the extraordinary blend of grapes in the Célèbre 2007 from Ata Rangi in Martinborough is a blast of joy.