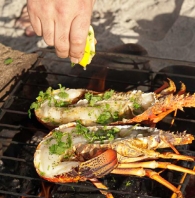 If you have just dived for the crayfish yourself, the best way to eat this is straight from the barbecue on the back of the boat, with a glass of New Zealand’s wonderful Pinot Gris. If you are not a diver, the barbecue at home will do just fine.

Place live crayfish in the freezer for 20 to 30 minutes to anaesthetise them before you despatch them.  Then place the crayfish the right way up on a chopping board with their tails fully extended and, with the point of a large sharp knife between the eyes, push straight down towards the board.  Once the tip has reached the board, using the tip as a pivot, guide the blade down through the body, cutting the crayfish in half.  Set aside on a tray.

Peel and pound garlic with salt and pepper until smooth. Whisk the egg yolks, vinegar, mustard, pounded garlic and other seasonings together. Slowly add the lime avocado oil, whisking continuously. When all the oil is added, finish with the water and correct the seasoning. A few drops of lime or lemon juice can be added to enhance the taste.

Mix the melted butter, oil, garlic, herbs and seasoning in a small bowl. Put the halved crayfish on a hot barbeque, shell side down to protect the delicate meat from the intense heat while still infusing wonderful barbeque flavours.  Drizzle the melted butter mixture over the flesh and cook for 10 to 15 minutes depending on the size of the crayfish.  The flesh should change from soft and translucent to firm and white when cooked.

Transfer to a serving dish, cut side up, with the aioli in a dish on the side for dipping.

When the phone rings a few days before Christmas, with a British television crew asking if you can take them out on the water to help them snorkel for crayfish and kina for a new TV series to be shown in April….what do you do?  It’s the busiest time of the year at the Deli, we are flat out with weddings and Christmas catering, wondering how we are going to accomplish all the things we had already agreed to do.

Oh, and then they happened to mention that the programme is called ‘Extreme Fishing’ and is hosted by a certain Robson Green, star of ‘Soldier, Soldier’ and ‘Wire in the Blood’.  Well, I guess I might find a spare minute or two in my hectic schedule…..!

And so, on the last Saturday before Christmas I found myself at the Sebel Trinity Wharf, along with three boats with skippers and crew, three cameras (including an underwater one) and associated cameramen, sound equipment and soundman, the director, two safety divers, a paramedic and a chef. Oh yes, and Robson Green – in the flesh – a really great guy.

As our little flotilla headed out through the entrance we realised that there was going to be another star of this show, the Bay of Plenty in all its glory. The weather Gods gave us 35 knots from the northwest and a couple of metres of swell just to add a bit of realism to the ‘extreme’ side of the title.

After an hour or so we anchored around the back side of Motiti (I’d tell you the exact spot if Tony Burt of ‘The Hobbit Fishing Charters’ hadn’t sworn me to secrecy!) The idea was for Robson to catch a crayfish with his bare hands and so, with some trepidation, he zipped up his wetsuit and the snorkelling got underway.  Everyone was tense, if Robson didn’t catch a cray himself the day would be a bust. Not to worry, the combination of Robson’s enthusiasm and the Bay of Plenty’s abundance saved the day. A couple of hours later, with 5 crays in the bag, the day was already a huge success.

Just time for one last dive and a chance to put Robson well out of his comfort zone, this time snorkelling for Kina and then eating them fresh out of the water and raw…not something that an actor from the north of England will ever have done before, as you can tell from the look on his face!

With the wet side of the filming complete we were ready to do the good stuff and fire up the barbeque on the second boat. When a product is as fresh as this, there’s not much a chef needs to do to make it taste any better. I had brought along with me an easy Hollandaise sauce, made earlier in the food processor at the Deli, as well as my own Asian spice infused avocado oil and some Horopito to sprinkle on top to give it some ethnicity.  Although I wanted to keep the dish as simple as possible, I also wanted to create a ‘Kiwi’ difference from the other programmes the crew had filmed in Canada and the USA.  So I simply cut the crayfish in half, drizzled the Asian inspired oil into the half shell and seared them on a hot barbeque with the shell protecting the flesh from the aggressive flame. Served on a bed of rocket, picked fresh from my garden that morning, and a bowl of Pikopiko Hollandaise – fantastic!

Now the moment of truth, the camera rolls capturing the enjoyment of every mouthful, what can be better than fresh crayfish eaten with your fingers in a secluded anchorage accompanied by two wonderful local wines: Emeny Road Chardonnay and Steve Bird’s Marlborough Sauvignon Blanc – matchless combinations, enhancing the delicacy and quality of the seafood.  As we sit licking our fingers, protected by Motiti from the increasing wind and warmed by the late afternoon sun, there was no other place on earth any of us would rather be.

Before hauling the anchors and braving the wind we toasted the day with some ice cold Deinlein Lemon-cello, another fantastic Bay product produced locally up in the Minden Hills in Te Puna, and some of my renowned ‘Avocado Chocolate Truffles, made with 70% cocoa solids chocolate, locally grown avocados and a little Grove Avocado Oil.

With just enough light left for our bouncy trip home, our day was done.  The British star and his television crew came to the Bay to do a job but leave with the knowledge that they have only scratched the surface of the most perfect place on earth. So who was the star of this day?  Was it Robson Green the actor and celebrity?  Tony Burt the skipper, diver and all round good Kiwi bloke?  Or Peter Blakeway, the opinionated, award-winning chef?  Well actually the real star of this show was The Bay of Plenty who showed her beauty, her bounty and a little bit of attitude!